Named for "ichi," the Japanese word for one, and as an allusion to the cue sport term scratch. It is also an indicator of his demeanor; he appears tense and highly strung, as if he is loaded with caffeine (which he likely is, due to the aroma it is mentioned he leaves behind).Itchy has the ability to slow down time relative to himself, allowing him to act with blinding speed. This has enabled him to give Spades the slip repeatedly (and also allows him to cheat at cards).Itchy used his abilities to sneak up on Clubs Deuce, free Doze and swap the Midnight Crew's hats around. Despite his lightning-fast speed, his reaction time seems lacking—Spades Slick was able to trip him up by simply sticking out one leg and waiting for him to stumble over it. Deceased after Spades had his way with him.

Named for "dos", the Spanish word for two.

Doze has the ability to slow down time, but only for himself, which may also be related to his name (doze as in sleep). As such he is completely unfazable, a trait that comes in handy whenever he is captured, which is often. Doze was captured by Clubs Deuce and given a sound drubbing with Clubs' Crook of Felony. He was freed by Itchy, and began an incredibly slow escape. Clubs recaptured him, tying him up with a Stretch Armstrong doll and shoving him into his Battledrobe. He was later killed when Clubs Deuce put an explosive in his hat. The same explosion took out Trace. Doze is also know as being "Very slow upstairs and downstairs" He is also much slower than the felt when doing certain things for example in **the inaugural death of Mr. seven** Crowbar is able to jump back to the moment when Doze begins to speak and Crowbar explains that Doze has not even began to open his mouth to speak 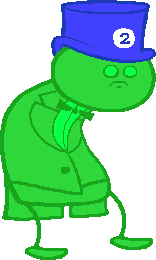 Named for "tres", the Spanish word for three, as well as his ability to retrace people's Past Trails.

Trace is skilled at infiltration, and has invaded the Midnight Crew's secret hideout multiple times. He can also interact with people's Past Trails, although if they are aware of his ability and that he is the culprit, they'll know for certain that he'll be at that very location in the future. He, like Fin, resembles a shark (a pool shark), and his ability is related to a shark's natural skill of following a source of blood in the water over a great distance.Trace uses his abilities to harass Diamonds Droog from the future, revealing his future location. Trace then follows Clubs Deuce's trail through the mansion, finding Doze tied up in the hall. However, under Diamonds' directions, Clubs had left a bomb in Doze's hat. The resulting explosion kills both Doze and Trace.