The Felt are a rival gang of the Midnight Crew on the planet Alternia. While the Midnight Crew have a playing card theme, the Felt are based around the game of pool. Each member is green in appearance and has a hat with the color and number of one of the 15 pool balls. 7 and below are solid colors, 9 and up are striped, and 8 is solid black. Their headquarters is an entirely green mansion. The name of the Felt and the recurring use of the color green both evoke the green felt cloth that lines a pool table. According to Caliborn, their "skin" also feels like the felt material used for pool tables. Many of the Felt have time-altering abilities - or at least believe that they do - and also have an obsession with clocks and timepieces, possessing one thousand clocks, all of which Spades Slick has vowed to destroy.

The 1-7 and 9-15 members of the Felt are leprechauns who originally come from the dead session played by Caliborn, the past version of Lord English. As he begins to unlock new planets, a new minion is unlocked on each one, each wearing a pointy cap bearing the same number and color as their future headwear. They initially lack names, and Caliborn calls them things like "yellow hat" and "blue hat"; Andrew Hussie is the one who suggests that they be given mobster-themed names, because "mobsters are cool".

At the end of the Midnight Crew intermission, all of the Felt except Snowman, Lord English, and Doc Scratch are dead, at least in the timeline Spades Slick finds himself in, though several of the "dead" numbered Felt come back during Act 5 Act 2's Scratch interlude due to their time-travelling abilities.

Spades Slick had previously made it his personal mission to murder them all, on top of the Midnight Crew's primary mission of plundering Lord English's secret vault. After the destruction of the A2 universe and Andrew Hussie's death, however, Slick used Die's doll to revive the Felt (save for Snowman, who he claims reviving could have some really weird consequences) under his command. He recruits Ms. Paint to serve as the gang's new 8-ball member.

There is a poster of the Felt in Dave's room which he uses to make the Felt Duds.

During [S] Collide, the entirety of the Felt is defeated, except for Crowbar and English. 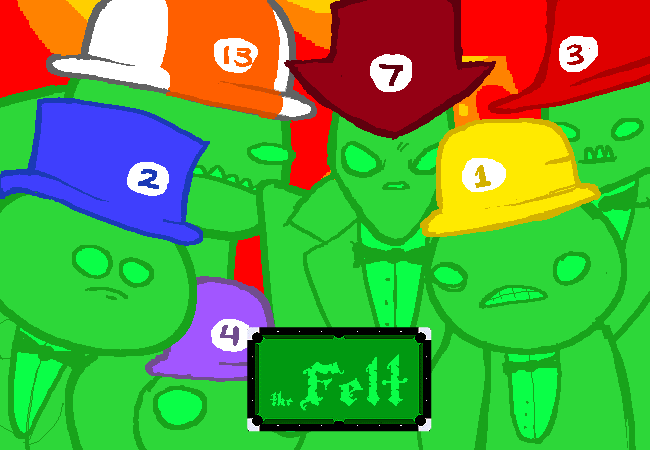 Lord English is the leader of the Felt, and a demon from outside the universe. His appearance and clothing is possibly based on a pool cue. His name, following the Intermission, is always written with an animated pool ball cycle.

He apparently cannot be destroyed by ordinary means, but only through time-manipulation techniques. Named after the pool term 'english', meaning spin on the cue ball, and retroactively also named after Lord British from Ultima, who could only be killed by glitches and Easter eggs. Owns a Cairo Overcoat that represents the spacetime continuum and gets damaged when time-related things get out of hand, and a backup coat that may or may not possess the same qualities. In appearance, he is a hulking giant (easily ten feet tall) with a peg-leg, clawed digits and a skull-like head with a construction suspiciously similar to that of Lil Cal, identifying him as a cherub. English is effectively the cue of the group (as noted by his leg) as he is the actor which drives forward events, by using Doc Scratch in order to affect other individuals on his field of play. English is said to have control over time and will be (was) summoned to the universe when it ends (ended) by a mysterious ~ATH code.

Title: Lord of Time(plus other components)

Doc Scratch has been seen in text form in chat with Vriska Serket and Rose Lalonde, using white text and no screenname. He is near omnipotent and near omniscient. His name is based on the term for pocketing the cue ball. Unlike the rest of the Felt, he was not introduced or even hinted to exist until Act 5; as he wasn't even on the Midnight Crew's hit list, it was unclear if he was considered a "formal" part of the gang (although a number of gang members are seen in his residence during Act 5 Act 2), until a Paradox Space comic, written by Andrew Hussie, placed him as the gang's second in command (Number 2).

He is Alternia's first guardian, an entity meant to protect the planet on which they are born, as well as facilitate the planet's 'ultimate purpose'. It is suggested that he is a skilled manipulator, whether through overt (mind control) means, temporal inevitability, or simple psychological exploitation. Like Snowman, Scratch is different from the rest of the Felt in that his name is not printed entirely in green (the o is white, like a cue ball) and his skin likewise is not green (also white). His head doesn't look like a ball as much as a white hole in space. He does not bear any particular resemblance to the members of the Midnight Crew or the Felt, making him something of an oddball. This is due to how he was created: just as Becquerel was created by combining Halley with the MEOW code, Doc Scratch was created by combining Lil Cal and a Magic Cue Ball with 5 codes (t1CK, t0ck, 8r8k, H34DS, and honk HONK). The white color from the cue ball colored his head (which appears much like the cue ball itself), as well as the rest of his skin.

Following his inevitable death, he becomes the vessel for none other than Lord English.