Horuss Zahhak is the Page of Void and Equius' dancestor. Not much is known about him, apart from what was revealed in Openbound part 3.Upon exiting the meteor back into the dream bubble as Meenah a small "scene" (Aranea's exposition) gives more information about some of the post-scratch "ancestors":

The Page of Void was a self taught master of mechanics, an avid patron of the fine arts, a passionate 8ody 8uilder, archer, am8rosia collector and steamwright. A poet, a scholar, a warrior, a lover, he was all that his caste demanded and more. A true troll Renaissance man. His name means "He Who Stalks With The Muscle8easts." 8ut all of his proficiencies were hard won, 8uilt from the 8lank slate as his aspect would imply, advancing at the slow pace his class would as well. Yet in spite of all he worked to make something of himself, he amounted to very little. Responsi8le for neither great feats of heroism nor acts of villainy, he was just another game piece to 8e moved a8out the 8oard. The aspect ruling his life would always conspire to dampen his relevance. Void is easily the most mysterious aspect, the one which inherently defies rational understanding. This makes it particularly fascinating, and just as frustrating, to light players such as myself. Casting illumination upon nothing itself is futile. For to truly know void is to paradoxically cause it not to 8e! The role of the void player is to somehow em8race nothingness, to 8ecome one with it. And yet in total contradiction with this, to make use of the power it grants and serve a role of relevance, one must find a way to overcome it! To see the limitless potential in the void. To find everything within nothing, and 8ring it into 8eing. 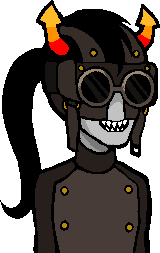 He does not speak as he chewed out his own tongue - he is described by Meenah as having a "stitched up mouth", a literal fact later confirmed through exposition. He seems to gain enjoyment from having signed conversations with Meulin Leijon, who is deaf and uses sign language. He wears a skeleton costume. He appears to be some sort of a mime, parallel to Gamzee's clown.

The Prince of Rage actually used to be quite talkative. That is, until he had a nightmare which prompted a bizarre incident, after which he would never speak again. He took a sort of spiritual vow of silence, which I'm sure was probably related to his esoteric faith. Once, well before our session began, Kurloz and Meulin were in a very loving matespritship. It really seemed to everyone they were made for each other. One day, they fell asleep together. Kurloz then had a nightmare so terrifying, he released the most dreadful sound imaginable. It truly echoed the horror of the Vast Honk itself. The noise was so loud and so awful, Meulin went completely deaf, and her hearing never recovered. Kurloz was undoubtedly devastated by what he'd done to her. He was so distraught, he chewed off his tongue and sewed his mouth shut and has never spoken a word since.

Kurloz was also the only eye witness to the event which caused his moirail Mituna to overexert himself and permanently burn out his psychic abilities. According to Aranea, he applied every last bit of energy he had to save his friends from a looming threat. Whether this threat had something to do with Kurloz is unknown. Kurloz was later seen working with his dancestor, Gamzee, helping him assemble his fake god tier outfit to wear while helping Caliborn in his session. He was also seen following Vriska Serket and her party of trolls on their treasure hunt for Lord English's weakness. He picks up Vriska's discarded overcoat, which resembles English's Cairo Overcoat. When Meenah was rallying up the ghost army, Kurloz (along with Damara, Aranea and other Vriskas besides the main one) was not present. It can be inferred that he chose not to because of his religious dedication to Lord English. 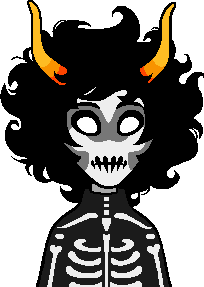 The Grand Highblood - Post-scratch self

Cronus Ampora is the Bard of Hope and Eridan's dancestor. Not much is known about him, apart from what was revealed in Openbound part 3.Unlike all other trolls so far, his shirt is neither black nor in his blood color but white. His weapon of choice appears to be Ahab's Crosshairs, like Eridan and Dualscar, as it was found in a chest near him.

Upon exiting Terezi's hive as Meenah, a small "scene" (Aranea's Exposition) gives more information about some of the post-scratch "ancestors":

The Bard of Hope may seem a little jaded these days, but once he had a deeply abiding faith in magic, and dedicated himself to becoming a great wizard. He became convinced he was hatched to defeat an extraordinarily evil magician, one he swore the angels foretold of. Though when pressed for the name of the man, he would not say it, claiming it was too dangerous to even enunciate. Part of his self-aggrandizing mythos was that this magician once somehow from afar tried to strike him down at a young age, so he would never have to face him. But the evil spell was deflected, sealing the magician's spirit away in a series of unassuming vessels until he could find some other cunning way to enter our universe. The attack supposedly left him with his distinctive scar. But at some point he became disillusioned with magic. If there ever was any truth to his far fetched vision, the legacy of defeating the evil magician would have to be passed on to his descendant, or if his descendant proved to be as much of a failure as he did, then perhaps on some other Hero of Hope. I'm unsure why he suffered this crisis of faith, aside from the obvious reasons having to do with an overall lack of character, or any other redeeming qualities. Perhaps someone talked him out of his beliefs. Maybe a friend close to him. Or, if one is to believe his fantasy held any water, perhaps someone who was in league with the evil magician.

She wears dark grey pants and a black shirt, similar to Terezi's clothes. The shirt has a fuchsia Pisces symbol. She also has fuchsia and white sneakers, gold bracelets with what appear to be fuchsia gems, colored glasses, and gold piercings on one of her eyebrows. She wields a golden 2x3dent as her weapon, which looks the same as the one wielded by Feferi. Her hair has a pair of long, thin braids that trail on the ground behind her. She has fuchsia colored blood, as one would expect. Her horns are identical to Feferi Peixes and she uses a Typing Quirk similar to Feferi's, substituting )( for capital H, -E for capital E and using "-in" instead of "-ing". She is a Derse dreamer, and the first troll to be known by her name first, rather than her Trollhandle.

Aranea tells us that Meenah was the heiress to the throne, but that she saw her future role as the Queen as nothing but a form of enslavement, because she would have been responsible for the well being of all her subjects. She abdicated and fled to Beforus' moon to hide. There she found "the game" and began to manipulate her peers into playing it. After the game began, Meenah became a constant source of trouble for her team and frequently attempted to engineer feuds and rivalries between her friends. She did so because she believed that her team would be more likely to win if they were more aggressive. Her efforts were largely ineffective and actually backfired when her constant bullying caused Damara Megido to snap and turn against the other trolls. Damara fatally wounded her in a duel, and she was only saved when Aranea took her to her Quest Cocoon so she could die there and ascend to god tier. She refuses to wear her god tier outfit because she thinks it is ugly; as a result, none of the other players (except Damara and Aranea) knew about her ascension.

During the final hours of her session when it became apparent the session was unwinnable and Aranea came up with the plan to scratch their session, the Horrorterrors informed her that if the trolls were dead when the scratch completed they would continue to exist as ghosts, instead of being condemned to non-existence. After the scratch was activated she killed herself and all of her friends by exploding a bomb before the scratch completed. It was timed so that the scratch would take effect before the god tier players came back to life.