She is deaf, and often uses sign language and mimes to express her thoughts. This is best seen in her conversation with Kurloz Makara, who also mimes. Her quirk is to add intricate catfaces to the start of her text, and to use cat puns (similar to the fish puns Meenah uses) in speech, most often replacing parts of words with 'purr'. The former two are similar to her dancestor's quirk and they also share their habit to replace "ee" with "33" Her text is also in all caps, indicating that due to her deafness, she cannot tell how loud she is speaking. Her deafness may be a reference to Pedro Ponce De Leon, a monk who is credited as the first teacher for the deaf. He taught deaf people to speak, as well as to communicate in writing and simple hand gestures. This compounds on the reference in Nepeta's lusus, who Meulin shared and may have named identically as Pounce de Leon. Meulin's name was suggested by McBatman for Nepeta. It is a French surname, as well as the name of a small town in Burgundy, France which is part of the municipality of Dompierre-les-Ormes. Her name was chosen as a pun on "mewling", which is a term for the sound cats make. "Meulin" also sounds and looks similar to "Merlin," fitting her title as a Mage. 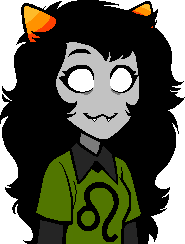 Not much is known about her, aside from anything revealed in Act 6 Intermission 3.Porrim is one of the few A1 trolls whose name was not suggested in the name suggestion box for their descendant. It could have been derived from Poryam, suggested by CasMat. Her name comes from Porrima, the traditional name of the star system Gamma Virginis, which resides in the Virgo constellation. It is also the alternate name for Antevorta (one of the Carmentae, who are Roman goddesses of childbirth and prophecy, and patrons of midwives). Coincidentally, it sounds like the Jewish holiday of Purim, which celebrates the the deliverance of Persian Jewish people from destruction, and is often accompanied with masquerading in costume, perhaps a link to her predilection for fashion and why she was one of the first to attend the MINISTRIFE!!! Costume Party. In addition, "porraceous" is a word meaning a light green color. From various bits of dialogue, one can glean that she has an interest in fashion, has had a fair bit of experience in the more concupiscent aspects of troll romance, and has better mastery of her abilities as a rainbow drinker than Kanaya. Additionally, she is a feminist, as she is concerned with female oppression and gender equality. This ties in to her associated zodiac sign Virgo, the maiden.

Not much is known about her, apart from what is seen in Act 6 Intermission 3. The name Latula was suggested for Terezi by Rauthiss. It is derived from Tula, the Hindu sign for Libra. Pyrope was suggested by Dragoshi. Her name could also come from a skateboard brand named Lush Tula, but this speculation is based around the fact that she enjoys skateboarding. Another speculation is that her name comes from the Romanian word "Latulă" which means "Noose" or "Snare" as a reference to her being the pre-scratch version of Neophyte Redglare. Like her Alternian descendant, Latula has a handicap. However, it is different. In an undisclosed incident, she lost her sense of smell, not sight. This handicap makes her slightly insecure; therefore, she puts up the front that she is the r4dd3st g4m3 g1rl 3v4 to overcompensate for it. It appears a tad off-putting to Porrim Maryam and she tells Latula to cool it on her act. In Meenah's quest to recruit minutemen for her militia against Lord English, she stumbles upon a door with The Sufferer's signature symbol that only Karkat can open. The player must be Latula in order to release Karkat from Kankri's overzealous preachings.

Aranea Serket is one of the pre-scratch trolls. She wears red shoes, white pointed glasses, and a blue longsleeved dress with a white Scorpio symbol. She has her hair at shoulder length and wears a necklace with the Signless' symbol. It appears that she is also older than the other troll players, having "lived" in the dream bubbles for so long that time has lost meaning to her. Though she works against Lord English, the actions she takes to achieve her goals steadily become highly morally questionable.When the suggestion box for Vriska's name was open, "Aranea" was one of the suggested names, given by Radiation. "Aranea" is Latin for spider, pronounced a-RAH-neh-a, "Araneae" serves as the name for the entire Order of spiders which separates them from other Arachnids. Derivatives of it are used for numerous taxonomic ranks from Suborder down to Genus.Within the A1 iteration of Sgrub, Aranea's role was the Sylph of Light. She is shown to have reached god tier, and has some kind of healing powers, to the extent that it's possible for her to restore Terezi's sight. Aranea spent three sweeps in a failed session, only to seek out Echidna for a way to reset the session, prompting Damara Megido to initiate the scratch. Aranea was then killed along with everyone else in the session by Meenah Peixes, in order to not be completely rewritten by the scratch, and entered the dream bubbles that Meenah's A2 descendant created. 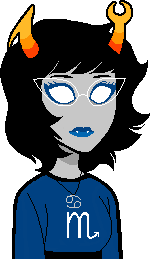