Jane Crocker is a young lady who lives in the post-scratch universe, and resides in the same location as John did in a pre-scratch version of the universe, her room strongly resembling his. When an attempt was made to name her, it was revealed that her name had already been given at the age of thirteen, engraved on her Honorary Placronym. Besides, she probably would have just been given some dumb name like "Barnstench Fartface". She is sixteen years old, and she has been 'selected' to exclusively try out the Alpha version of the upcoming game Sburb along with her friends. Her chumhandle is gutsyGumshoe. The image on her shirt is that of a Frightening Beast from Problem Sleuth, made into an icon resembling John's Green Slime Ghost. It's notable that the Beast in Problem Sleuth only appeared on the other side of a Window when it was turned off, parallel to the fact that Jane Crocker was introduced shortly after the Yellow Yard was crossed and the fourth wall was broken. Jane's denizen is Hemera, as indicated by her browser.

She is also the heiress and biggest fan of the company Crockercorp. Because of her status as heiress to the Crocker company, attempts have been made on her life recently, causing her dad to ground her. She dislikes the idea of Roxy hooking up with Jake and wonders why she doesn't hook up with Dirk.Her dream self seems to have woken up very shortly before the release of the Sburb Alpha, as indicated by the dream she describes to Jake English. Like Jade and John, she is a Prospit Dreamer.

Planet: Land of Crypts and Helium

Dirk Strider is the post-scratch incarnation of Dave's Bro. Prior to his proper introduction to the reader, he is referred to by Jane as D. Strider, and later by Roxy as Di Stri. Dirk's chumhandle is timaeusTestified (TT), in line with the rule that post-scratch kids have the same chumhandle abbreviation as the ectobiological sibling of the kid whose pre-scratch guardian they were. This completes the set of chumhandles when added to GT, GG, and TG. He uses the same color text that Davesprite uses, analogous to the fact that Jane and Jake use the same colors as Nannasprite and Jadesprite, respectively. He also signed the book that he sent to Jane in orange pen. Dirk's web browser, and therefore the name of his denizen, is Yaldabaoth, given to him by the game due to his natural skills as a warrior.

Dirk's meteor arrived on Earth sometime during the 25th century, along with Roxy Lalonde. According to this pageSburb Logo, he landed in the middle of the ocean with Lil Cal, and used the puppet as a flotation device to somehow get to a house to live in. He grew up alone in the single remaining penthouse apartment of a high-rise building in the now-flooded Houston, Texas. However, he is able to communicate with Jane and Jake (who are living around 4 centuries in the past) and establish Sburb connections with them by means of Trollian.

He, like Jake and Roxy, gave Jane Crocker a bunny for her thirteenth birthday, though he had to build it from scratch, unlike the others. It was ...somewhat less innocuousSburb Logo than the other two bunnies and is such a little troublemakerSburb Logo. His bunny contains the original Con Air bunny which he stole from his Bro's museum.When he was 13 he somehow obtained a captcha of his brainSburb Logo and used it to create an AI duplicate of himself to use as an auto-responder.

His dream self on Derse has apparently been awake for years, much like Dave's was, although Dave was not aware of it. After a little practice, he learned how to be awake there while awake [on Earth] too. However, he isn't the world's best multi-tasker, causing him to zombie the fuck out whenever he concentrates on things happening dream-side. He has been using his dream self to gather information on Derse, and to watch over Roxy's sleepwalking dream self. His dream self is seen covered in the Hegemonic Brute's blood, having foiled the Batterwitch's assassination attempt. He then chose to reveal his dream self's wakefulness to Derse by publicly impaling the Brute's head through a Dersite banner.

Planet: Land of Tombs and Krypton

Roxy Lalonde is the post-scratch incarnation of Rose's Mom. Jane frequently refers to her as Ro-Lal to mimic the way that Roxy refers to her friends; this also served to obscure Roxy's name until she was formally introduced to the reader. She was initially implied to be Jane's server player in this conversation; however, this changed when Jane's computer exploded, leaving Dirk to take over the role.Roxy's chumhandle is tipsyGnostalgic (TG). She uses a slightly brighter shade of pink than Jaspersprite, which matches the color of her pre-scratch self's scarf. [S] Roxy: Sleepwalk reveals that Roxy has eyes that match the color of her Pesterchum text, in line with the pattern established by the other kids. Her rendering in a symbolic manner is extremely similar to Rose's, with the exception of her shirt design, black stockings and hairstyle.

Roxy's Pesterchum icon and shirt feature a pink Mutie, reminiscent of Jade's Becquerel shirt. Like the rest of the post-scratch kids, she shares her chumhandle abbreviation with her corresponding pre-scratch kid's ectobiological sibling.Roxy's denizen is Nix, the same as her web browser. This may also be a reference to her role as the Rogue of Void, as "nix" can be defined as "nothing" in English. The word originates from German, where it is commonly used as an abbreviation for nichts, meaning "nothing."When Roxy's full name is revealed, the two letters that were hidden (X and Y) were referred to as chromosomicSburb Logo, referring to the X and Y chromosomes. This could be a reference to her interest in biology, as she's shown immediately afterwards to be interested in ectobiology and esoteric sciences. This could also tie in to the fact that she is tasked to makeSburb Logo the Matriorb with her void powers, a item that is key to the biological reproduction of the Trolls. Additionally, it is implied in at least the dubiously canonical PXS comic "Birds and BeesPXS icon" that Rose's Mom, her pre-scratch self, was responsible for setting up the ectobiology componeny.

Roxy's meteor arrived on earth sometime during the 25th century, along with Dirk Strider. However, she is able to communicate with Jane and Jake (who are living around four centuries in the past) and establish Sburb connections with them by means of Trollian.Sometime in the past, Roxy's mother was killed by the Batterwitch. She first began her investigations into Sburb after learning it had the possibility to resurrect her mother, which parallels Rose's motivation to resurrect her cat Jaspers.Her dream self is an avid sleepwalker. Shortly after she is introduced, Roxy blacks out after sipping thoughtfully from a martini. In her ensuing dream, her dream self sleepwalks into a dream bubble and meets god tier Rose. She later confides to Dirk that she believed it to be her daughter and that it was a futuredreamSburb Logo. This may also tie with how Rose and Dave were created by combining the genetic material of Rose's mom and Dave's bro, the pre-Scratch counterparts of Roxy and Dirk.Roxy, along with Dirk and his Dersite dream self have an advanced insight to their session that neither Jane nor Jake know. So far Roxy has been attempting to convince Jane of the evils of the Batterwitch, and is frustrated at her unwillingness to believe. She goes as far as rigging Jane's hacked Sburb copy to explode and framing the Batterwitch. However when Jane finally comes around to believing her, Roxy (unsuccessfully) tries to abort the fake assassination attempt.

Planet: Land of Pyramids and Neon

Jake English is a young man living on a Pacific Island in the room that used to belong to Jade Harley in the pre-scratch universe. When an attempt was made to name him, it was revealed that he, like Jane, already had a name allocated to his placronym on his thirteenth birthday. Not that it really matters though, as you would have probably just stuck him with some vulgar, childish moniker like "Barfbreath Turdsmirk." His chumhandle is golgothasTerror. His browser of choice is Abraxas.

He is Jade's mysterious pen-pal and signs his letters to her as J. He helped Jade work on John's present, providing the four weapons. He mentions in his letter that, while the bunny was his idea, someone else was "twisting his arm" to get him to make it. It is shown here that it was Calliope that was doing the aforementioned arm-twisting.He has access to a transmaterializer, and uses it to send the modified bunny to Jade, despite his residence in a universe entirely different from Jade's own.In his letters, he claimed to be Jade's grandson and Jade believes him because she felt like she was "talking to family." Strictly speaking, however, this is not true; it is a misunderstanding, based on them living into two different versions of Earth. In Jake's universe, Grandma English, who is genetically Jade but lived a very different life, is his adoptive Grandmother.

He was present in Jane's dream of Prospit the night before the release of the Sburb Alpha, meaning that he is a Prospit dreamer. Jake's dream self is dead, having being killed on the Condesce's orders; his cause of death was being fed peanuts by the Courtyard Droll as he slept, indicating that he shares John's allergy of peanuts.Jake used to own a private journal before it was appearified by Roxy Lalonde. It was shown to contain a series of letters spelling the word BARK, not unlike the MEOW code found in Rose's journal that was used to create Becquerel. 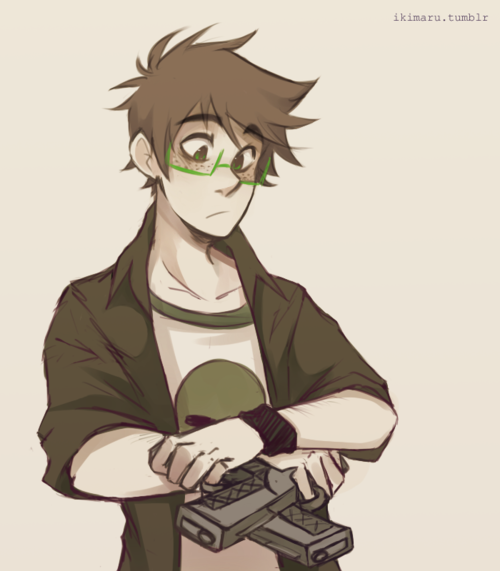 Planet: Land of Mounds and Xenon